Here’s a filly that that looks a real runner, she was selected from Inglis Premier Sale in Book 2 in March. Selected by our eagle eyed bloodstock agent Jeremy Rogers this filly is by the Group 1 winning 2YO National Defense. National Defense stands at Widden Stud and is by the sire of sires in Invincible Spirit and he was rated the champion 2YO in France with a timeform rating of 118 after winning Chantilly Prix Jean-Luc Lagardere by 4.5 lengths in race record time.

The fillies dam, Relaunch is by Statue Of Liberty and was a three time winner and placed in town. She is a half sister to the stakes winner Cavaloce, this is only the dam’s second foal and she is yet to have any of her progeny to race. National Defense’s first yearlings are on the ground in 2022 and we think we have the best filly of this sire this year. So much so, the Widden Stud team who sold this filly have stayed in the ownership.

The team have been very successful finding lovely horses without big pedigrees at competitive prices, think Twitchy Frank, La Falaise and Anjana just to name a few.  The filly is having a short break at Leneva Park in Northern Victoria and she will be educated for six weeks. She will be given every opportunity as a racehorse and will be under the guidance of  Group 1 winning trainers Anthony and Sam Freedman at both Pinecliff in Mornington and their Flemington stables. 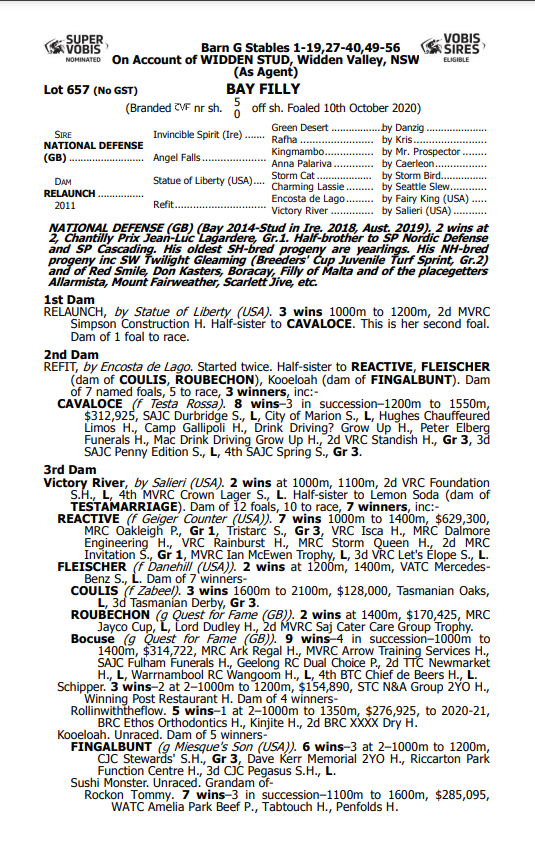