Mixed results for RTD runners over the weekend 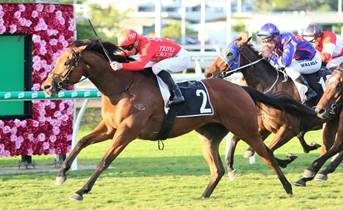 Mixed results for RTD runners over the weekend

It was a frustrating weekend for RTD and our owners with a mix bag of results. Starting on Saturday at Warracknabeal, Elton’s Song seemed to have a bad day at the office with an ordinary run. While he jumped ok and travelled well throughout the race, when the time came to hit the button he picked his head up and didn’t let down at all. In what appears to be a head scratcher he has not gone well at Warracknabeal in a couple of runs and he has pulled up well so we are obviously keen to get him back on synthetic track where he has produced his best effort to get a quick return to form.

At Flemington we had our star 3YO filly Anjana go around in a 3YO Hcp down the famous straight over 1100m. She performed below expectations and while she hit the line ok we did feel she would have been more competitive. Subsequent vet checks and scans have revealed that she has a hairline fracture and small bone chip of the fetlock which will require a small surgery and a 12 week break. This does explain why she had tapered off with her last couple of runs and we are looking forward to getting her back to her best for the autumn next year.

At Eagle Farm on Saturday our other star 3YO filly Krone competed in the Group 3 Fred Best Classic and went enormous. From barrier 16 Michael “Cuzzy” Walker had to go back and ride for luck on a day when there were very few horses making ground. She was 17th at the 600m and Walker threaded the needle perfectly to have Krone finish strongly for a great third. She is going really well and has pulled up great. Mick Price was so happy with her run that she will be aimed at the Group 2 Queensland Guineas in a fortnight.

On Sunday we had a good old fashioned bad ride by Clayton Douglas on Artie Dee Two. The talented flat and jumps hoop didn’t do a lot wrong in his defence but he just took a little too long to get going and was boxed in at critical times of the race. Unfortunately he had a chequered path all the way down the straight and when he got out at the 150m he hit the mark hard to finish an unlucky fourth. Mitch Freedman has this horse going really well and he will have a couple of quiet days before deciding what path we will take next.