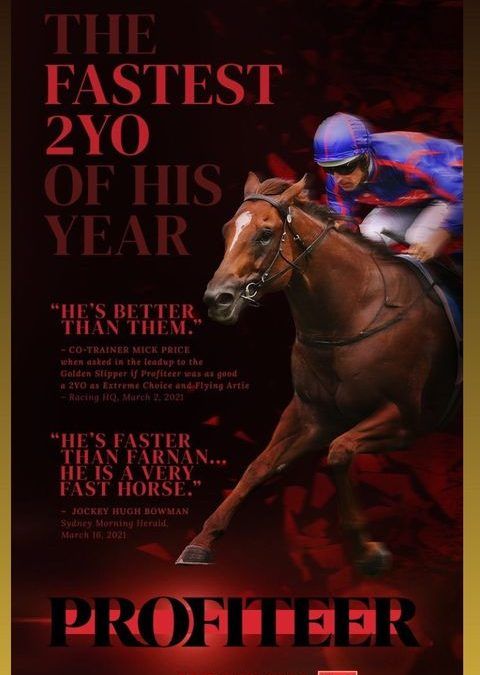 Its official, Profiteer has been retired and will now stand at Newgate Farm for the 2022 breeding season.
Profiteer retires a winner of three of his nine starts, the biggest success coming in last year’s Inglis Millennium, $2 million, which he won by 5-1/4 lengths.

He was narrowly defeated by Anamoe in the Group 2 Todman Stakes (1200m) and started $4 favourite in last year’s Group 1 Golden Slipper (1200m) in which he finished seventh.

Newgate Farm’s Henry Field made the official announcement on Tuesday, and he is extremely confident Profiteer can become the next member of his family to become a successful stallion.

The colt will join the Newgate roster this breeding season, standing at a fee of $16,500 and Henry he expects Profiteer to prove popular with breeders who admire that line.

“In my mind, he profiles very similarly to his sire Capitalist and his grandsire Written Tycoon, who were crack juveniles, very fast juveniles, who have both made an outstanding mark on the breeding landscape,” Field said.

“I think he profiles up as a horse who can follow in their footsteps.

“He’s going to stand at $15,000 plus GST and I think people feel they’ll be able to breed a mare to him and be a really good chance of getting a really fast juvenile.”

“I’m sure the horse retires to stud with his ability outweighing his eventual race record and when you have a horse with that much brilliant speed and natural ability as a two-year-old you’ve got to have a colt you’re very excited about,” Field said.

On behalf of the RTD team we would like to thank all of our owners in Profiteer and hope you have all enjoyed the ride. We look forward to seeing Tobie’s babies in the next few years and we will be sure to support him with a few of our own mares.