Roll The Dice Racing heading to our favourite hunting ground 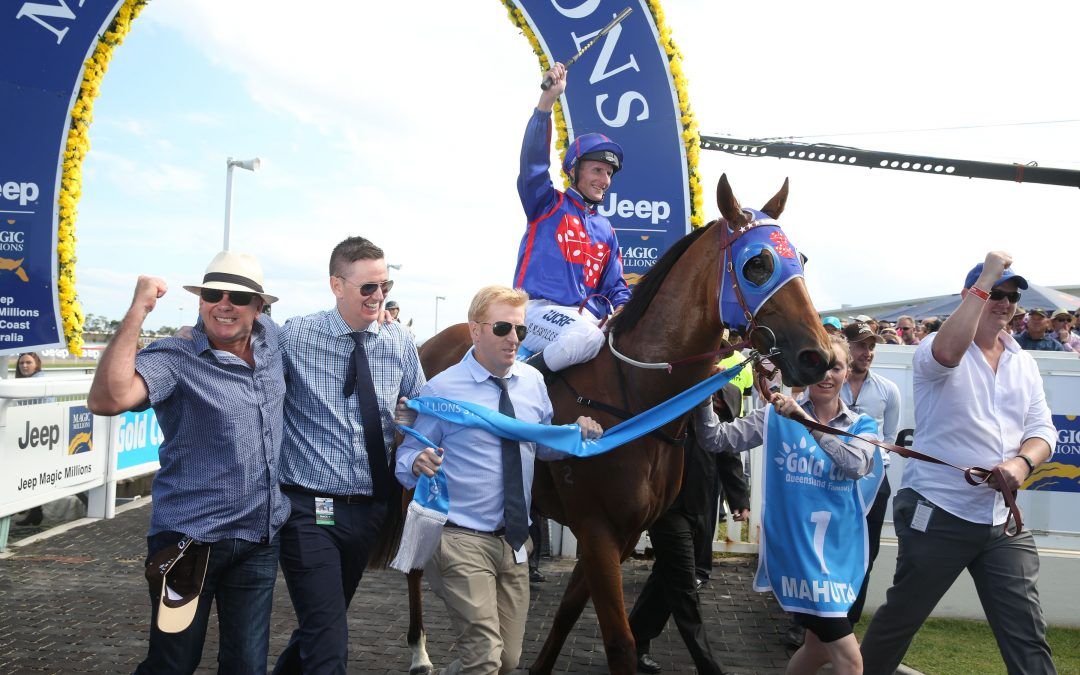 The Gold Coast Turf Club and Magic Millions Sales complex has been a happy hunting ground for the Roll The Dice Racing Team and their colours. In 2016 we hatched an audacious plan to keep Mahuta going through the Melbourne spring of 2015 and off a 6 week break he did the unthinkable and won the 3YO $2m Guineas over 1400m from barrier 20. It was an amazing day and weekend and one all of his joyous owners will never forget. Mahuta was a $35,000 purchase and went on to amass over $1.7m in prizemoney and now stands as a stallion at Lynward Park Stud in Western Australia.

Fast forward to 2020 and promising 3YO He’ll Haunt Us still hadn’t broken his maiden due to bad luck and injury. With the gelding due to miss the spring after an incident at the Caulfield racecourse pool, the quick thinking of RTD director Steve Travaglia another northern assault was also planned, this time the Magic Millions maiden worth $200,000 and that plan was realised with a terrific training performance from Mick Price and Michael Kent Jnr. He’ll Haunt Us was a $150,000 purchase and went on to win the Group 3 Zeditave Stakes in the Autumn and won over $250,000 in prizemoney in his 4 starts and was subsequently sold to Hong Kong interests for massive money shortly after.

This year will see our 5YO mare Krone compete in the $1m fillies and mares race over 1300m on Magic Millions day. Krone has been a stable favourite of RTD and she rarely runs a bad race. Her final lead up run will be this weekend which will have her in prime condition for the $1m race. Krone has already done an amazing job, she was purchased for $120,000 and her career prizemoney is already over $380,000 and she is already a very valuable broodmare.  Let’s hope she can win her next two starts and give her owners even more reasons to be at the Goldy in a couple of weeks.

Of course we will be purchasing again during the sales so if you are looking for a yearling and keen to be at the Gold Coast next year, like the Krone owners this year then get in touch with Steve – 0419 508 533 steve@rollthedice.com.au or Rob 0448 462 824 rob@rollthedice.com.au to register your interest ASAP.

Looking forward to seeing you all on the Goldy in 2022!