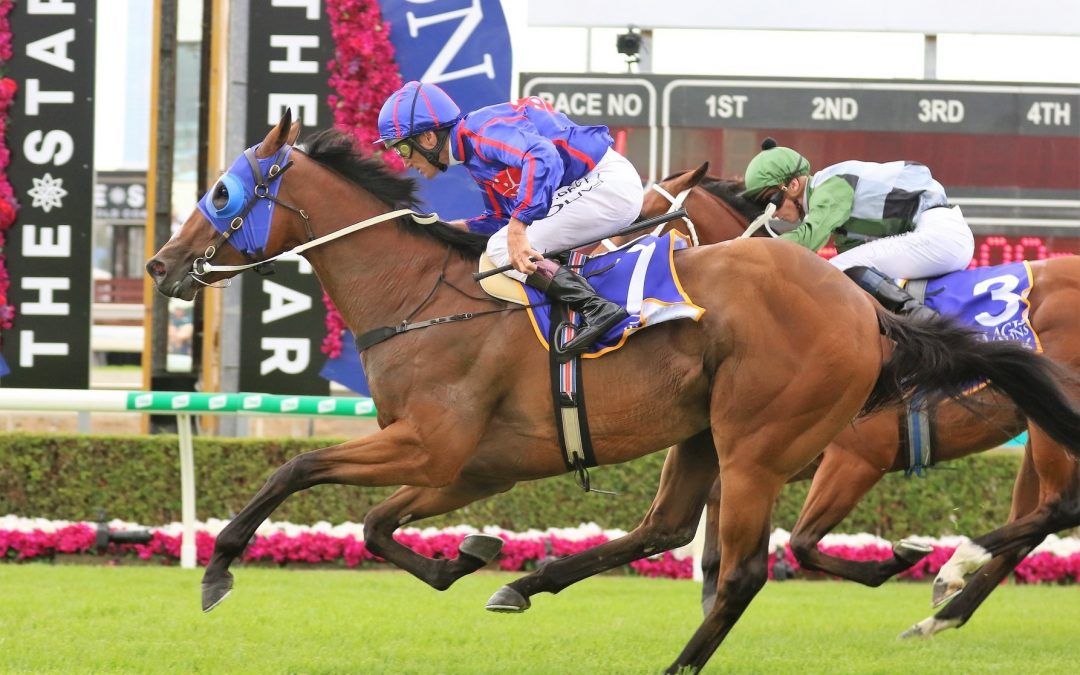 Maybe lightening does strike in the same place twice? At least for Roll the Dice Racing it does… they climbed the top of the mountain in 2016 when Mahuta won the 3YO Magic Millions Guineas and on the weekend they won Australia’s richest maiden when He’ll Haunt Us saluted in the Magic Millions Maiden. over 1200m for 3YO and above.

He’ll Haunt Us was purchased at 2018 Magic Millions sales from the Kitchwin Hills draft by our astute bloodstock agent John Foote. A $150k purchase the son of the ill fated Time For War showed plenty of promise in his early days and trainer Mick Price thought enough of him to go to Adelaide for the 2YO Magic Millions race in Adelaide in March. After a creditable 6th he then went to Sandown and sat three wide and was beaten by a couple of smart 2YO’s to finish an unlucky third.

He was then sent to the paddock with the spring in mind and a tilt towards the Caulfiled Guineas. While he was showing plenty of promise he was gelded and returned to Mick’s stables in great shape but was injured in a pool accident involving another horse and took significant skin off his legs. It was safe to say that the spring was off and he was sent to Laura Dixon’s Dowling Forest rehabilitation farm to recover. While spelling the RTD team earmarked the Magic Millions Maiden as a possibility if his wounds healed quickly enough. From that day on it was a race against time for Laura to manage War’s rehab to ensure the horse’s wounds healed quick enough to get him into work and ready for a Queensland assault. To her credit the horse was ahead of time when the wounds healed and RTD sent him to pre-training straight away.

By the time he got Mick Price’s stables in late November you could tell that the injury was a blessing in disguise as the horse had grown and matured into a lovely horse. This is when the magic of Mick Price and Michael Kent took shape as the team prepared a plan in getting the horse to Queensland a month before to allow him to acclimatise with two solid trials before raceday. The confidence of Mick in the lead up to the race was infectious and the owners were all geared up for raceday.

The race itself was a hard watch with He’ll Haunt Us’ action all over the place. He was on the wrong leg the whole way and went around the turn like a drunken sailor. Champion jockey, Damien Oliver showed why he is the best in the business by not panicking and allowing the horse to balance up. When he did he let down beautifully in the straight to power past stakes placed Hulk to win by half a length to the rapturous applause from his loyal owners who made the trip to the Gold Coast.

He’ll Haunt Us will have a week off at Kia Ora Stud before returning to Mick Price’s Caulfiled stable where he will continue his autumn carnival preparation. One thing for sure is that the owners are going to have a lot of fun with this guy!